There have been 20 new cases of Covid-19 in New Zealand in the past 24 hours, but no further have been deaths reported.

The new cases are made up of six confirmed cases and 14 probable cases, bringing the total number of cases in this country to 1386.

Director-general of health Dr Ashley Bloomfield said today there are now 16 significant clusters related to the coronavirus. The latest cluster is connected to an aged care facility in Auckland.

He said 13 people are in hospital, with three in ICU. Two are in a critical condition  – in North Shore and Dunedin hospitals.

“We now have 728 reported cases of people who have recovered from Covid-19 infection, that’s an increase of 100 from yesterday.”

There are three new cases today in the Southern DHB area, after just one new case was announced yesterday. The total number of cases for the SDHB area is now 213, the highest in the country.

The cases today comprise two in Queenstown Lakes and one in Dunedin. 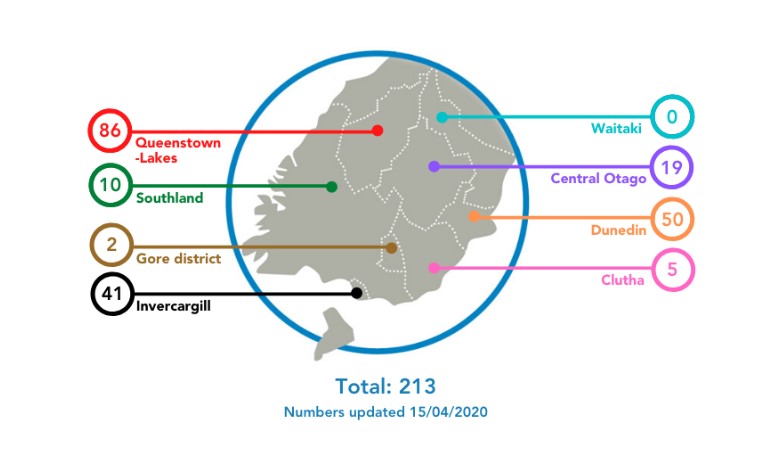 Dr Bloomfield said 115 Covid-19 cases in New Zealand are health care workers, but less than five people were confirmed to have been infected by a patient they were caring for.

He said 2100 tests were processed yesterday.

Prime Minister Jacinda Ardern also confirmed at today’s conference that government ministers, including herself, and public service leaders were taking a 20% wage cut for the next six months.

Ms Ardern said she knew the decision to take a pay cut would not affect the government books, but leadership had to come from the top.

“If there was every a time to close the gap between different positions, it’s now. This is where we can take action, which is why we have.

“We feel acutely the struggle that many New Zealanders are facing, and so too do the people I work with on a daily basis.

“And while in itself won’t shift the Government’s overall fiscal position, it is about leadership.”

Ms Ardern also said a media rescue package would be considered soon by ministers, and there was also longer-scale work that would come out further down the track.

She said the Government was spending a lot of money advertising about Covid-19, but had to be where the people were – and that included social media.

“Whether we like it or not, that’s where the public are, and we need to reach them.”

She did not want to give any more details about media packages ahead of them being announced, but said they would not be a surprise to the sector.

Clutha, Valley win through to final

From Otago to fields of Uzbekistan